Kolomoyskyi: Hi.
Tsarov: Hi.
Kolomoyskyi: Where are you at the moment? Still there?
Tsarov: Yes. I’m still here.
Kolomoyskyi: How are you getting on?
Tsarov: Quite OK.
Kolomoyskyi: Well. I guess there’s some huge trouble. There was a Jew from the Dnipropetrovsk Jewish community. He got killed.
Tsarov: What happened there?
Kolomoyskyi: Well, some Jew from Dnipropetrovsk Jewish community got killed. And I’m in synagogue at the moment.
Tsarov: What was he doing there?
Kolomoyskyi:  Well, it doesn’t actually matter what he was doing. It’s your head that costs so much now. Fuck, they give huge money for your head.
Tsarov: Mine?
Kolomoyskyi: Yours. They give million dollars for it. Yes. And they said they would be searching everywhere. So I just said it. I wanted to reveal it for you that you’d better lead it on in Moscow. Stay where you are just. Don’t leave anywhere.
Tsarov: There’s one thing I wanted to tell you. In Africa there are some…..
Kolomoyskyi: Tomorrow they will be just catching your people here.
Tsarov: There’s such…. some poison in Africa
Kolomoyskyi: Look, I care a shit what they’ve got there in Africa. Stop it just. Stop telling stories. Now, I’m telling you that there was praying in synagogue before Shabbat. We were praying for that Jew killed in Mariupol…. Fuck it.
Tsarov: And so….
Kolomoyskyi: And they said it was Tsarov who’s to be blamed for everything. Fuck. And people close to you will be the first in the list of much wanted tomorrow. So, prompt them they’d better hot foot it out of here….  We’ll be hanging them right in the square…. fuck it. Yea, I put it to you that it is necessary to say to Markov not to arrive here, in Ukraine. On no account! Hallo!
Tsarov: Don’t try to call me up. Don’t make calls to me, Ihor!
Kolomoyskyi: I shouldn’t telephone you, eh? All right! Go for it! Bye.
Tsarov: Go for it! That’s that!

Telephone conversation between President of Customs Union Suppliers Association Oleh Noginski and his interlocutor in Ukraine.
10 May 2014 23:18

Ian: Hallo.
Noginski: Hallo. Ian Borisovich, good evening. I beg your pardon. Happy holiday. Did I wake you up?
Ian: Oh, no. It’s not too late. Happy holiday you too. Wish you peace, good health and well-being…
Noginski: Ian Borisovich, I’m calling because of a serious problem, it makes me really concerned.
Ian: What happened?
Noginski: Well, the 9th of May in Mariupol, did you see what happened there? Certain Shelemchak was killed there.
Ian: Who was it?
Noginski: A Jew from Dnipropetrovsk. At least if we can trust Kolomoyskyi. But what is even worse, Mr. Kolomoyskyi called Tsarov and told him that broadly speaking that day in all synagogues of Ukraine it was announced to all right Jews that there will be a reward for the head of Tsarov’s and Russian separatists. When I heard the word ‘synagogue’…
Ian: You don’t say so. That can’t be. I just know that… Today I went to a synagogue. We were reading prayers. Everything was, so to say…
Noginski: Ian Borisovich, I’m not saying that, surely, it didn’t happen in the synagogues… But when he is speaking about it… I don’t know whether he was recorded or not. In case his words appear in the media, can you imagine what happens in that case?
Ian: Did Kolomoyskyi say it was Tsarov exactly?
Noginski: Yes. A million for his head. He also said that the next day his family would be hanging. His relatives. Listen, I just repeat his words… You know, Oleh, he is not like anybody else, he never lies. And he sent it to me late in the evening, he was deeply shocked. Another man who was by his side at that moment told me the same.
Ian: Terrible. No, I just can’t understand how a Jew… Jews in general, so to say, must not allow themselves anything of the kind… Gave him a personal call?
Noginski: Yes, he likes it. He called Markov recently, told him how he would get burned in case he comes to Odessa. That’s kind of his amusement. I’m not sure but I feel like he went crazy, seriously. By the way, that’s a totally proved out fact that he paid those guys in Odessa. Totally. And it was done to seat Palytsia as governor. Even at the BYuT headquarters they prove it out…
Noginski: The situation went out of hand. Their task was to beat them up, give them the works so that they all get to the hospital, and the camp was to be totally destroyed.
Ian: Well, you know, there were the boys of Avakov. They could have done it all.
Noginski: Well, there was an agreement. In case… it all still keeps voiced. There was an agreement. He came up and said, ‘Why are you fiddling around that Odessa’? There was that ‘Kulykovo Field’ all the time, non-stop. ‘You better give Odessa to me and it will be just like in Dnipropetrovsk.’ So to say, no one will dare to show up. They said, ‘OK’.
Ian: He used to come to Odessa. He has already been in Odessa.
Noginski: He is still there. And has been busy during the recent three days with what makes 16 people dead who had been arrested and stayed alive after the ‘Trade Unions House’. Two people were put a knife near the building. And so forth.
Ian: Well, Oleh, I just, you know, can’t believe that Benya is able to do that.
Noginski: You know, many people here say they feel he went kind of crazy. These days, you know, Korban is actively trying to take Tsarov’s property. Well, there’s nothing I can add.
Ian: I just don’t know him, that’s why I cannot say anything. I don’t know him.
Noginski: Well, he is a good friend of Benya… And Filatov already gives a reward for moskali and already pays. I just… Ian Borisovich, the thing it that Benya’s affairs are up to him. He can do whatever he likes. In case he imagines himself second Hitler… Well, I think there will be a second Nazi Germany on the territory of a small piece of Ukraine. Benya will be a multibillionaire and the owner of this territory. But what Jews in the rest of the world will do… I just think it is necessary to publicly back off from this process right away.
Ian: What do you mean? What process?
Noginski: From Kolomoyskyi. From Benya.
Ian: Well, how?
Noginski: Just report that in this case the world Jewish community, firstly, has nothing to do with personal position of Mr. Kolomoyskyi, secondly, a) don’t back up neither Odessa, nor Mariupol, nor any other and sincerely sympathize with them. And thirdly, state that in case any of Jews is noticed in Nazi crimes, we will be first to deal with it.
Ian: Thank god, there hasn’t been any problem with it lately.
Noginski: The more so because of one man who decided to become a billionaire, a multibillionaire or imagined himself to be an owner of Ukraine…
Ian: No, the matter is that the synagogues are… They should be standing apart from all these things. A synagogue is a place for meeting, it’s a prayer place. It should deal with inner life of Jews. That’s it. This is so to say what a synagogue is about. So, dealing with so to say politics, dealing with such things and backing up…
Noginski: I mean… You know, I’ve got such feeling that standing apart is not an option for us.
Ian: Come again.
Noginski: We can’t help standing apart. By the way, I asked Oleh not to make it public. His first thought was to make it public.
Ian: No. By doing this he will definitely bring reproach on Jews right away.
Noginski: You don’t say so! It will start a huge wave of tension. The more so, it will start all over the world. 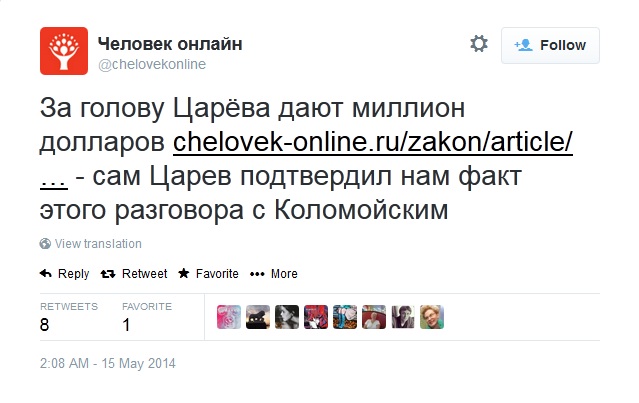